Is your business only on Facebook, that’s a NO, NO, NO

How many times do I have to tell you???
DO NOT RELY ON FACEBOOK TO BE YOUR BUSINESS PLATFORM!!!

But if your costumers like Facebook, you can’t afford to be picky about it, so the question is: Do you want to be close to your costumers???

Looks like that Facebook has been around for ages. 2014 is the year to celebrate the 10th anniversary, but for most of us (and your clients) only recently have joined the social network. Most os my ‘friends’ joined Facebook in 2009 and later. So, we may ask where will we all be in 5 years??? In Facebook, or in another social network? There are lots of the, and no one knows which will be ‘the next BIG thing’.

Ever wondered that you don’t pay rent for being on Facebook? Did you ever read the Terms of Service at least? This is like having your physical business on a store, without paying rent and you have signed a contract that you haven’t read. Ouch, not very prudent.

Maybe you’ve heard lots of stories, but this morning I was listening to the radio and heard that Nuno Markl (a famous humorist in Portugal) had his Facebook account blocked for 12 hours. Do you know why? Because he published this image:

You may not agree with Facebook blocking an account because of an innocent poop, or even being part of the 3 persons who complaint about this ‘obscenity’. Nevertheless, this example reminds us that we DO NOT control Facebook, and may be out of business because of the opinion of three persons.

In the end, Facebook is good because it opened a new and incredible way to flirt with our costumers. Nowadays it’s easy to communicate and feel back their needs. It’s a new era, a new market and WE ARE FEELING GOOD!!!

So what should you do??? Have your own platform that you control, meaning HAVE A SITE for your business, and make sure that your business is well integrated with every social network that your costumers may be. A good integration, means that you guarantee your online presence, even if someone blocks your account for some shitty reason.

This is the right way to have your business!!! 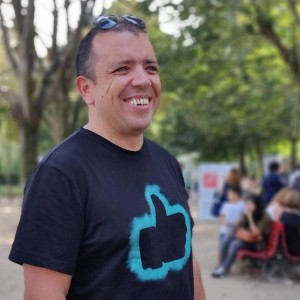 passionate about the internet. social media lover and wordpress geek.
PrevAnteriorYour costumers are online 24/7. What about your business???
SeguinteLet’s keep Internet free and openNext